Until last year the road had a winter closure on it. Highways repaired it and the closure was lifted. Less than a year later it was full of potholes caused by HGV's using the lane as a delivery route to the few houses there – one of which had been having building work done. Some of the local council dust carts have been using it as a short cut also.

I was asked by PROW if I could take a look at it after they had received complaints about its condition, which led to us undertaking repairs on it, rather than let it getting to a state where they would have to close it again.

It turned out to be an interesting day in more ways than one.

Ed Matthews and myself made a start once we got there and shortly after, one of the local residents dropped by and mentioned that he couldn't believe we were volunteers and not getting paid for our work! 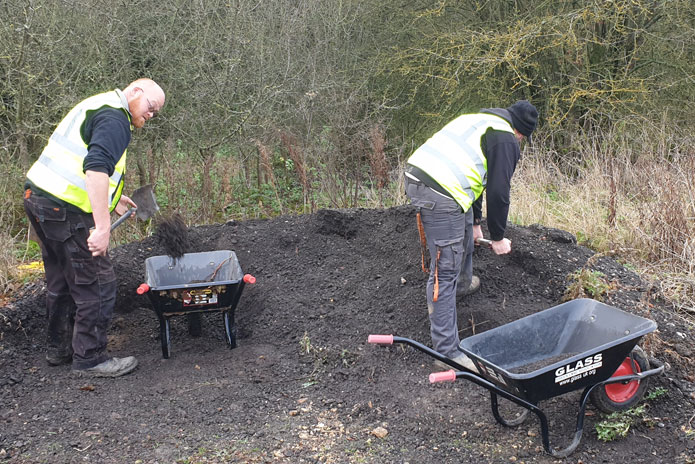 Once this section was complete, we moved to the other end and carried on with the repairs there. A lady came out of her house and offered us a cup of coffee which of course we didn’t refuse. Whilst chatting to us, one of our volunteers came in from that end in his very dirty Discovery – the lady immediately said “oh here they come!” We pointed that it was actually one of our volunteers. It was clear she was shocked at this and asked if we were all 4x4 drivers. We explained all and about GLASS and what we do, and her attitude totally changed. A bit of education goes a long way! We met a few more people during the day and the appreciation for what we were doing was clear to see. Also a useful contact was also made with a gentleman who is involved with volunteers on community projects, who asked if they could work with us in the future.

So, drain-off's dug, pot holes filled = one byway repaired, locals perceptions changed and very grateful for our efforts. You can’t ask for better than that. A big thanks to Andrew Metters for giving up his time to help us.